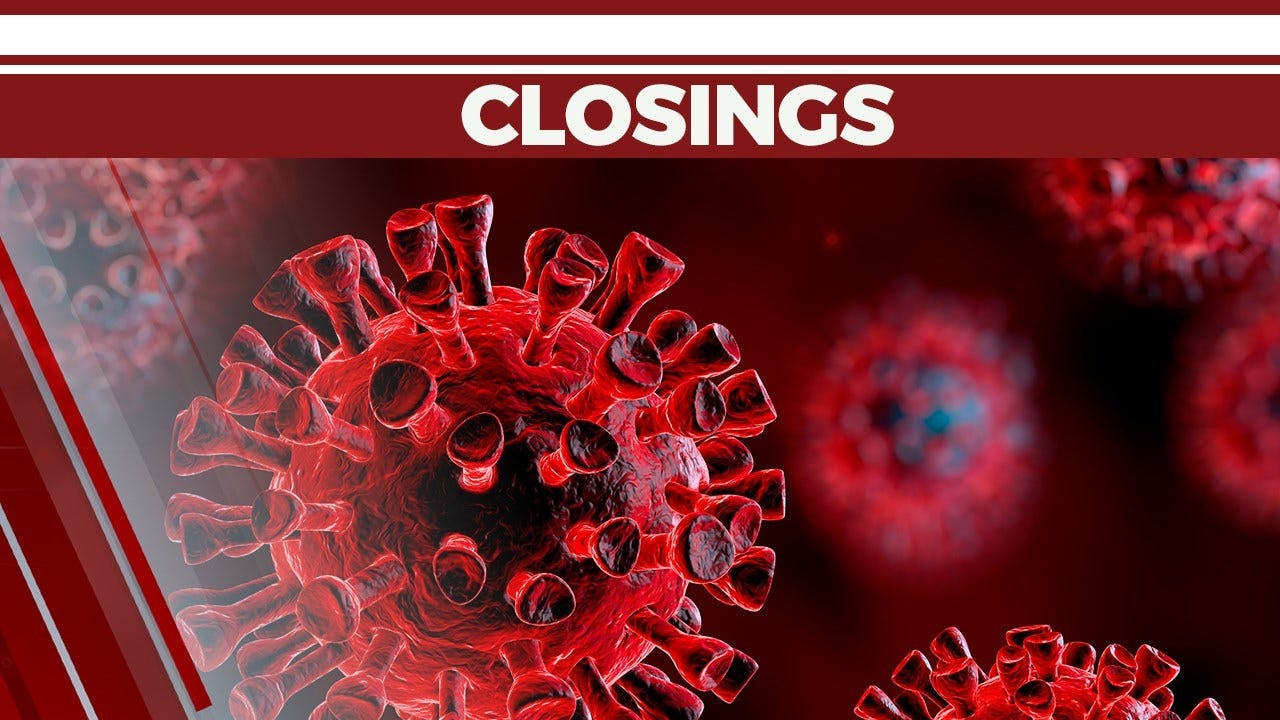 The 2020 coronavirus (COVID-19) pandemic has prompted numerous closures, cancellations, suspensions, and postponements across Oklahoma. If you're looking for school closings, click here. However, we are using this page to add as much information about coronavirus-related closures, cancellations, suspensions, and postponements here.

The Redbud Classic canceled all its activities and events for 2020 due to coronavirus (COVID-19) concerns.

ACT testing scheduled for April 4 will be rescheduled due to coronavirus concerns. All students registered for the April 4 test will receive an email and instructions for free rescheduling to the June 13 date or a future national test date.

The Foo Fighters have postponed its concert from April 16 to Dec. 1 at the Chesapeake Energy Arena.

The Oklahoma Aquarium is now closed due to coronavirus (COVID-19) concerns.

The BOK Center announce that Alan Jackson's concert scheduled for March 26th has been postponed. Officials said the show will now take place on June 25th.

The Oklahoma Real Estate Commission will be closed March 16-March 17.

Rogers State University in Claremore is extending spring break to include March 23-March 27.

The Tulsa Zoo will be closed effective Monday, March 16 due to coronavirus concerns.

First United Methodist Church Tulsa confirmed that one of its members contracted COVID-19. The church will be closed this week.

Smoke & Guns 7 scheduled for Saturday, April 11 at Tulsa's BOK Center has been postponed to Saturday, June 20 at BOK Center.

City of Cushing officials have decided to close the Cushing Public Library, the Cushing Youth and Community Center, and the Cushing Senior Citizens Center. The closure will last until April 1, 2020. The Cushing Municipal Court is also postponed until April 7, 2020.

The McKnight Center in Stillwater postpones all events through April 5.

The ECHL announced in a statement Saturday evening that its Board of Governors decided to cancel the remainder of the 2019-20 regular season.

The Tulsa Home & Garden Show will not open Sunday, March 15.

The Tulsa Historical Society and Museum has made the decision to close to the public on March 14 through at least March 28, 2020. All public programs are canceled, including presentations at the Museum and any programs off-site.

The Norman Swap Meet event has been canceled. Originally scheduled for March 19-21.

Monster Jam at the BOK Center has been postponed from its March 28-29 date. No new date announced yet.

All weekend services at Church on the Move have been canceled.

Life.Church Services nationwide will be moved to Church Online for March 14-16.

Signature Symphony at Tulsa Community College is postponing the Signature Classics concert, Beethoven 5, which was scheduled Saturday, March 14, 2020. For questions, call the PACE ticket office at 918-595-7777 or email signature@tulsacc.edu.

First Lutheran in Tulsa will not hold services March 15.

The City Of Tulsa cancels all city-sponsored events with crowds of 250 or more as well as events permitted by the city until April 15.

The SAT exam scheduled for Saturday, March 14 at the University of Oklahoma has been canceled. A date to reschedule the exam has not yet been set.

The Oklahoma City Zoo will temporarily close on Saturday. The zoo plans to tentatively reopen on Monday, March 23.

Toby Mac's March 21 show at the BOK Center has been postponed. It will be rescheduled for a later date.

The OU College Of Medicine 'Match Day,' set for March 20, has been canceled.

Tulsa's Woody Guthrie Center has closed as of March 13 until further notice.

The Tulsa County Library will be closed beginning March 13 for at least two weeks, library officials said in a release.

The Wanenmacher's Tulsa arms show on April 4-5 has been canceled.

MercyMe has postponed its March 21 concert in Oklahoma City. They have rescheduled for Saturday, October 3.

Carrie Underwood's March 14 concert at the Choctaw Casino in Durant has been postponed, rescheduled for Sept. 11.

The 21c Hotel is closed temporarily. A hotel spokesperson says they anticipate reopening next week.

Railroad Earth has canceled the remaining dates on their winter tour, including the band's appearance at Cain's Ballroom on March 26.

Baby Shark LIVE! at Chesapeake Energy Arena has been postponed. It was originally set to happen April 17. It will be rescheduled.

Sam Noble Museum is closing between March 14 and April 5. All programs and events during this time have been canceled or postponed. Program registrants will get an email with more information.

Lukas Nelson & Promise Of The Real have postponed their April 29 appearance at Cain's Ballroom.

The Stockyards City St. Patrick's Parade scheduled for Saturday, March 14, has been canceled.

The Harlem Globetrotters have suspended planned games on their domestic U.S. tour, including appearances in both Oklahoma City (March 14) and Tulsa (March 15).

The University of Central Oklahoma has extended Spring Break by one week, and they have canceled or postponed campus events through April 30.

Oklahoma Christian announced late Thursday that it would transition all in-person classes to online starting with March 22 sessions, and continuing through at least April 3. In an email sent to News 9, university officials said that graduate classes would meet next week as scheduled. The current plan is to transition back to in-person classes on April 5.

River Spirit Casino announced all their March shows: Trevor Noah, Willie Nelson and Candlebox have been postponed. Tickets will be valid for future dates or refunds will be available.

The Oklahoma City Dodgers' season will be delayed due to the coronavirus pandemic. Major League Baseball has already suspended Spring Training and delayed the start of its season. Minor League Baseball will work with MLB to determine a state date in the future.

Gathering Place in Tulsa is remaining open, but they have canceled all indoor events and activities through Spring Break.

Rep. Kendra Horn's Saturday appearance in Shawnee for a Tribal Community Town Hall has been canceled.

The Cher concert that had been postponed in Oklahoma City for Thursday night has been rescheduled for Sept. 18.

The ECHL (home to the Tulsa Oilers) has suspended its season until further notice.

The Oklahoma Premier Clubs (OPC) have suspended league play through April 6. All league games will be postponed. The plan is for those games to be played at a later date. League officials will reevaluate toward the end of the month.

The Tulsa National Weather Service office has canceled storm-spotter training Thursday night in Muskogee. It had been scheduled for 6:30 p.m. at the Muskogee Civic Center.

The YMCA of Greater Oklahoma City sports department has postponed youth and adult games and practices until March 23. According to an email from sports director Norris Williams, "this postponement will impact one weekend of games and those games will be rescheduled for later in the season, allowing for a full-game schedule."

The Oklahoma Soccer Association (OSA) has suspended games played in state-run leagues (e.g., traveling rec, OPL) until March 23. All games between March 13-22 have been postponed.

The Glitch Mob has postponed its tour, including an April 29 concert at Tower Theatre in Oklahoma City.

From the Oklahoma City Recruiting Battalion: The OKC Women's Panel scheduled for Southern Nazarene University on Friday, March 13, has been postponed to a later date.

Oklahoma State's Men's Tennis matches against Tulsa and Abilene Christian have been canceled. They were set for March 13 and 15.

Oklahoma State's 'Cowgirl Invitational' softball tournament, set to start March 12, has been Canceled. There will be no games at Cowgirl Stadium from March 12-15.

The Oklahoma State equestrian meet versus Fresno State, set for March 14, has been canceled as has the Big 12 Equestrian Championship.

The Medieval Fair of Norman, set for April 3-5, has been canceled.

KISS' show at the BOK Center in Tulsa has been postponed and rescheduled for October 4.

The Dan + Shay show, set for March 20, has been postponed and rescheduled for July 30.

The OK Contemporary Arts Center has postponed all events tied to its opening week, including Opening Celebration, Grand Opening and regular opening hours.

The Michael Buble show at Chesapeake Energy Arena, scheduled for April 3, has been postponed. There is no reschedule date available yet.

The OSSAA has postponed all state basketball tournaments. "We will update the OSSAA website as to when the tournaments will be rescheduled," the association tweets Thursday morning. During a presser Thursday, the OSSAA said all events for the weekend of March 14-15 would be postponed.

The Big 12 men's and women's basketball tournaments have been canceled, as have the conference's equestrian and gymnastics championships.

Oklahoma City Public Schools are closed Friday, March 13, ahead of Spring Break. The plan currently is to return to class March 23. District events for Thursday night, March 12, are also canceled.